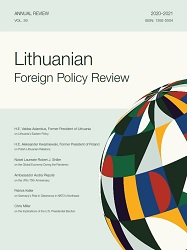 Summary/Abstract: After the first post-Soviet decade in which history was made largely without Russia and to its perceived detriment, Yeltsin’s successor gradually seized the advantage and did so on the basis of growing national confidence and collective self-respect. The protests in Khabarovsk are a warning that Putin’s template of pre- and post-election management might finally be running its course. Yet his response to those who challenge this template is unchanged: manipulation, vilification and pressure A catalogue of unexpected foreign policy challenges, some artfully managed and some poorly managed, has not dented the Kremlin’s efforts to use the means available to diminish further the supposedly inexorable erosion of Western “hegemony” and the sway, not to say attractiveness, of the liberal-democratic order. [...] Whatever the rewards of such conduct at home, its most conspicuous results abroad have been the estrangement of Germany and a program to increase Sweden’s defense budget by 40 percent.