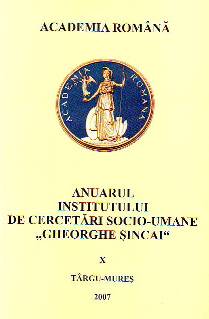 Summary/Abstract: Placed at the extremities of the Latin world, one in the West and the other in the Orient, Spain and Romania had nevertheless sporadic spiritual contacts, even if a certain historical and geographical parallelism seems to keep a more archaic and pronounced Latinity than in the case of the other European Latin countries. A more accentuated interest of the Spanish towards Transylvania was manifested at the end of the 16th century. Mihai Viteazul’s anti-Ottoman campaign was intensely mediated in Spain. More important, one has to point out that Nicolae Spătaru Milescu’s work drew the attention of a Spanish traveller and that Codru Drăguşanu’s travel account was presented at the Spanish Royal Academy. The epoch of the direct contacts would come later, when the Romantic fever of travelling would affect the Romanian young people who were studying abroad. The most important example in this respect is the case of Mihail Kogălniceanu who was longing for the beauties of Spain. His travel account was kept in manuscript and it is entitled Notes sur L’Espagne, 1846, and are introduced in an edition of Mihail Kogălniceanu’s work, by Dan Simionescu. The author’s love of Spain and literary talent make him a true poet of landscapes.