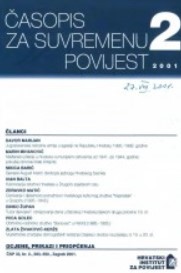 “Uzor djevojke”: obrazovanje žena u Banskoj Hrvatskoj tijekom druge polovine 19. st.
“Model-girls” - the Education of Women in Croatia During the Second Half of the 19th Century

Summary/Abstract: By employing Michael Foucault’s thesis on a close correlation between knowledge and power, the author attempts to show the ways in which the pedagogical discourse on the education of women was used in justifying the power on the basis of which women were limited in their educational prospects in Croatia during the second half of the 19th century. The paper also deals with the founding and functioning of girls’ secondary schools and analyses the attempts of the educational authorities to mold the behavior of their students by means of various disciplinary measures. In the second half of the 19th century the Croatian educational system gained in importance because it assumed the role of upbringing the youth traditionally performed by the family and Church. However, its influence was very limited. These limitations can especially be observed in the education of country girls, who were usually excluded even from elementary education. Only the girls belonging to the middle and upper-middle classes could actually attend girls’ secondary schools. These secondary schools were supposed to be the principal centers for molding the behavior of middle-class girls, which can easily be deduced from a host of injunctions and regulations governing the conduct of the students.