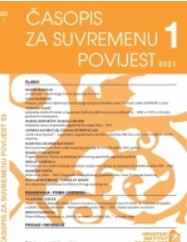 Osnutak, struktura i djelovanje boračke organizacije na lokalnoj razini: Općinski odbor SUBNOR-a Labin
The Founding, Structure, and Activities of a Resistance Organisation on the Local Level: The Municipal Committee of the Federation of Veterans’ Associations of the People’s Liberation War of Yugoslavia in Labin

Summary/Abstract: The Veterans’ Federation (later: Federation of Veterans’ Associations) of the People’s Liberation War of Yugoslavia was founded in 1947 as a socio-political organisation of People’s Liberation War veterans and active participants of the People’s Liberation Movement, with committees formed according to the territorial principle—from the Federal, through republican and provincial, to municipal and local committees. It was characterised by a well-developed system of operation focused on the systematisation of veterans’ care and all forms of material, social, and health care for members as well as preserving and evoking public memory of the war. Combativeness and vigilance became high priorities of its socio-political work, especially from the mid-1960s and early 1970s, when members of the Veterans’ Federation became politicised in the wake of important socio-political changes. Simultaneous reorganisation-related changes and the activation of new municipal committees contributed to the intensification of the work of local veterans’ organisations, which manifested as the establishment of some new commissions and, in the following years, an influx of new members and a closer cooperation with other social and socio-political factors in the municipalities. This paper first describes the founding of the Veterans’ Federation of Yugoslavia, its structure and most important fields of activity, and then the formation, structure, and activities of the Municipal Committee of the Federation of Veterans’ Associations in Labin, which, together with other municipal veterans’ committees in the Socialist Republic of Croatia, represented the focus of veterans’ activities regarding quality of life improvements of its members and preserving the memory of the People’s Liberation War in the local community. This paper examines the most important changes in the Federation of Veterans’ Associations’ mode of operation, describes the local strategies of ideological work and work on creating a culture of memory related to the wartime and revolutionary past, and the ways in which the veterans’ organisation resolved the material and social-health issues of its members, and therefore influenced their quality of life. The research was based on materials of the Republican Committee of the Federation of Veterans’ Associations of the Socialist Republic of Croatia and the documentation of the Municipal Committee of the Federation of Veterans’ Associations in Labin, which has been mostly preserved for the late socialist period.