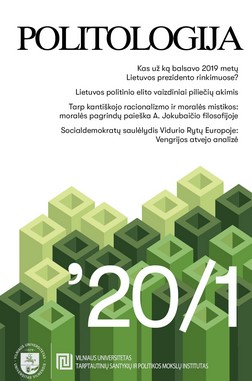 Summary/Abstract: This article investigates voter behavior in the 2019 Lithuanian presidential elections. Even though they appear as first-order (citizens elect an executive that enjoys considerable powers), Lithuanian academic literature has rather neglected this topic in the recent decades. In this article, I employ data from a post-electoral survey conducted after the most recent presidential elections and investigate what kinds of voters and motives were hiding beneath the results of the first and second round in the 2019 presidential elections. Results show that the cleavages that are relevant in the Seimas elections (ethnic and evaluations of Soviet times) also influence the vote choice in the presidential elections. Analysis shows that a ideological cleavage related to social liberalism may becoming important in Lithuania. Lastly, there are signs of retrospective voting, as the voters that evaluate the economy better were more inclined to vote for the presidential candidate of the governing coalition. However, the overall effect is not strong.