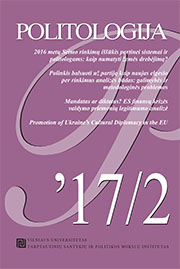 Summary/Abstract: This article strives to begin an academic discussion about the impact of the 2016 parliamentary elections on the Lithuanian party system. It was previously argued by political scientists that stabilization could be observed around the 2012 parliamentary elections. On the basis of renewed measures of electoral volatility (total volatility, party replacement and external volatility), the following is argued: the observed party system stabilization was more an exception than a trend. In 2016, the party system returned to the usual track: despite the deceptively small success of new parties, an increase in total and especially external volatility (signifying a weak institutionalization of the party system) was observed. If compared to the Western countries, such levels of electoral volatility point to an inchoate party system at best: 2016 was not that special, since earthquakes in Lithuanian elections are very common. Moreover, an updated map of party competition (based on the voters’ evaluations of the parties) space raises another challenge for previous research. It was previously accepted that traditional parties in Lithuania are quite successful in the integration of newcomers: hence, the party system sustains its patterns of competition from election to election, despite the high levels of volatility. However, the 2016 elections bring back the second dimension of competition, which now divides not only the newcomers and the surviving parties, but also the older populist parties vs. the election winner, the Lithuanian Farmers and Greens Union. Resting on these preliminary findings, the need to further investigate electoral behavior in Lithuania is obvious. The second part of the article discusses what questions are (again) raised for the electoral research after the 2016 elections. It is not an exhaustive list, but there is a clear need to advance knowledge in these aspects: the logic of electoral volatility at the voter’s level, the (changing?) role of the electoral system, the impact of the electoral campaign, the divide between voters and politicians. In the context of these unknowns, the current possibilities of both the party system stabilization and electoral forecasting (political scientists in Lithuania are sometimes criticized for their inability to do this successfully) are viewed critically. There is a parallel between seismologists and Lithuanian political scientists, as both an earthquake and earthquake elections are hard to predict. There is a three-body problem in Lithuanian elections: unstable interactions between the supply, demand and the electoral system lead to unpredictable election results. But precisely because of this there is a need for continuing research.