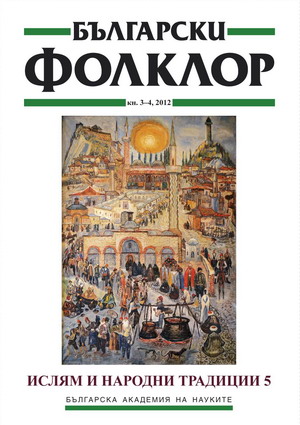 Summary/Abstract: The paper is dedicated to the 400th anniversary of the birth of Evlia Chelebi (1611). The subject of investigation is the mosques and mesdzhidi within the present boundaries of Bulgarian lands, mentioned in the itineraries of Evlia Chelebi translated into Bulgarian. They are presented in tables by applying the statistical method. The tables contain 10 items: type, settlement, number, date, fondator, architect, brief description, detailed description, and source. “The Itinerary” by Evlia Chelebi contains information on mosques in 57 settlements. Mesdzhidi were separately indicated in 20 settlements. The total number of mosques, included in the tables, is 351, and for mesdzhidi – 56. They have approximately the following distribution: to the north of the Balkan Mountains they are 175 and to the south – 191. In the western and central parts of Bulgaria the mosques and mesdzhidi are mainly located in the big cities, while in the eastern regions – they were built in comparatively small settlements. In the northeastern Bulgaria the total number of the Muslim temples is 65, while in the northwestern part it is 48. In the central areas to the north of the Balkan Mountains, they are 53, as their number is summed from only three towns: Nikopol, Lovech and Svishtov. If Plovdiv is taken as dividing the south of Bulgaria, then the number of mosques and mesdzhidi to the east is 92, while to the west it is 46. The number of temples in Plovdiv (53) is not included in this statistics. The mosques listed by their names are 86, and for a great part of them there is a brief description. The mesdzhidi listed by name are 20. The year of construction is indicated for 9 mosques and one mesdzhid. Seven of the mosques have inscriptions over the door, while two are honograms, deciphered by the author. The mesdzhid is not dated by a source. The fondators of 23 mosques are indicated. Nine of them carry the name of their fondator. The mesdzhidi with an indication of a fondator are two. Only for two mosques the architects are mentioned: Sinan aga, the architect of Ruystem pasha mosque in Rousse, and the great Sinan, the architect of Imaret mosque in Sofia. 9 mosques have a detailed architectural description, 58 mosques and 4 mesdzhidi have a brief description. The major part of the information on mosques and mesdzhidi is translated by D. Gadzhanov, while the remaining part is translated by S. Dimitrov. The data indicated from the itineraries of Evlia Chelebi are compared to statistical data on the number of mosques in the Danube villaette in 1869, published by V. Todorov-Hindalov.