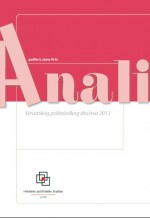 Funkcija političkog mita. O koristi mitskog za demokraciju
The Function of the Political Myth. On the Usefulness of the Mythical for Democracy