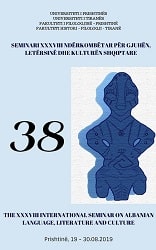 Summary/Abstract: The dominance of excessive eroticism, which is being used as a culture over our mentality and is being given high priority to social networks, is described in this paper. Another phenomenon is the approach of adolescents to this phenomenon who through social networks encounter “cultural” portals, different newspapers, which are the first news of provocative images. What results does this education bring to us in Kosovo? Some regional and international comparisons have been made with portals, media that “bombard” the site with erotic images. The paper also discusses why this phenomenon is used, its impact on massive scale? To what extent has our consciousness provoked and this phenomenon is growing massively, while it is known that actors, singers and, more generally, more artists are exposing body to values than values. In the paper, it is also about how to get out of this phenomenon.