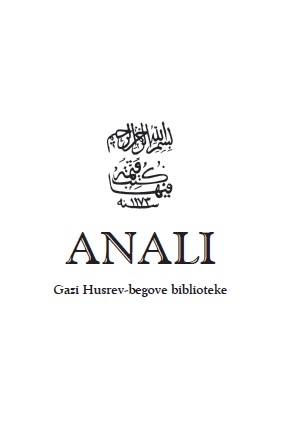 Summary/Abstract: This paper examines two waqfnamas (endowment legal document; deed of endowment) which date back to the 16th and the 18th century, and they refer to the waqfs (endowments) in Belgrade. Haji Osman, son of Husein, endowed the sum of 8200 akca (silver coins) by the waqfnama from 1566, and the income, which was earned from doing the business with that money, was intended for the purpose of maintaining the mosque in Zaynuddin-aga’s Mahala (mahala: a city quarter) in Belgrade and the reading of the Qur’an for the soul of the waqif (endower) on a regular basis. The second waqfnama, which established the waqf of Defterdar Ahmed Kamil-efendija, was written in 1741. This benefactor from Belgrade built, or to be more precise, restored the three mosques in Belgrade: Defterdar’s Mosque, the Tugdži Mosque and the mosque in the Požarevac qadiluk (the jurisdictional district of a qadi). For the upkeep of these mosques, but also for other charitable purposes, he endowed a hān (an inn providing accommodation, food, and drink, especially for travellers), a watermill, a vineyard, and a large number of properties such as residential buildings, shops and land.