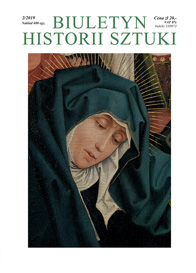 Summary/Abstract: The Cathedral of St Stanislaus in Vilnius was remodelled at the instigation of the Vilnius Bishop Ignacy Massalski beginning as of the late 1770s. In 1783-90, the works were headed by the architect Wawrzyniec Gucewicz, who had been first sent by Massalski to study in Rome, and then taken on a tour of North European countries, from where Gucewicz went to study architecture in Paris. Resorting to his Paris experience, in 1784, he created the concept of a monumental Neo-Classical building, authoring designs of the Vilnius Cathedral for Stanislaus Augustus (one of them has been preserved in the former royal collections, Fig. 1). in order to execute a large set of sculptures for the Vilnius Cathedral, in 1784, Bishop Massalski employed the known Roman sculptor Tommaso Righi. In the to-date research no attempt has been made to explain why it was Righi who was brought to Vilnius and not any other sculptor; neither has it been accounted for why the sculptures adorning the Vilnius church differ so much in their character from the Neo-Classicist forms of the façade they were made for. The initiator and committent the Cathedral’s remodelling, namely Bishop Ignacy Massalski (1726¬1794), had been affiliated with Rome from the time of his studies in Sapienza; he also visited the city several times on later occasions; furthermore, he remained in touch with the artists there, purchasing their works of art. The Bishop was on very special terms with the sculptor Vincenzo Pacetti (1746-1820), an important figure among the Roman artistic circles of the latter half of the 18th century. From the early 1770s until the end of his life, Pacetti wrote a diary, recording all the major events related to his own activity, and information on the personages visiting his studio, thus on the works of art purchased there. In the diary, Bishop Massalski is mentioned on a number of occasions as someone who bought numerous sculptures in Rome, using Pacetti as an intermediary. During his stay in Rome, Massalski frequently visited Pacetti’s studio, and examined the sculptures gathered there, intending to buy some of them; Pacetti, in his turn, also visited the Bishop on a number of occasions. Vincenzo Pacetti was a disciple of Tommaso Righi, who ‘loved him like a son’, and parted with him with much sorrow when Pacetti was leaving his studio in 1766. Following this, Pacetti did maintain close relations with his master, also cooperating with him. Therefore, it seems very likely that it was Vincenzo Pacetti who directly impacted the choice of his former master to be employed by Bishop Massalski to work in Vilnius.