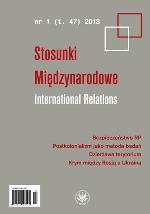 Summary/Abstract: The supranational identity concepts and their perception among nations constitute one of the determinants of the integration and disintegration processes in the post-Soviet area. One of these concepts is Turkism – an attempt to create identity foundation for the integration of the post-Soviet states under the aegis of Turkey. This paper analyzes the evolution of its principal assumptions and goals, dimensions of its realization, as well as determinants of its further development in the post-Soviet area. The idea of Turkism as a concept of ethnic-cultural community evolved from the nineteenth- century Pan-Turkism which postulated political integration of the Turkic nations. Among the determinants that limited political ambitions of Turkey after the collapse of the USSR, therecan be indicated: nationalisms as an expression of ruling elites’ interests, lack of supranational community feeling among the societies, concerns about the possible reaction of Moscow and fears raised by the Turkish hegemonic ambitions. As a result, Turkey started to put emphasis on bilateral relations with the post-Soviet partners and concentrate on cooperation in economic and social sphere, including cultural and educational activities. Although, even there the success of Turkey was incomplete, the viability of this pragmatic approach was proved by the revival of political dimension of mutual contacts in 2006–2008 and their institutionalization. In the coming years the following factors may determine the development of Turkism in the post-Soviet area: growing ambitions of Turkey as a regional player, dynamics of relations between Ankara, former Soviet republics, the West and Moscow, domestic policy challenges in the post-Soviet states, their developmental needs in the globalized world, and last but not least: the role of Ankara in strengthening the post-Soviet states’ multi-vector foreign policy as a method to maximize benefi ts from international cooperation. Divergent national and elites’ interests of the post-Soviet Turkic states should not be undermined. Against this background an important determinant will certainly be „oversensitivity” of Russia towards the idea of the Turkic integration, which will have to be taken into account by its partners. Moscow cautious approach results not only from the demographic structure of the Russian state, but also from its international identity, determined to a large extent by its ambition to re-integrate the post- Soviet area under its own aegis.