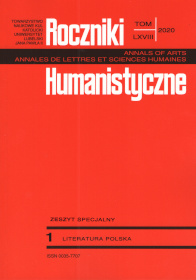 Summary/Abstract: Amateur theatre circles play an important role in promoting the ideas contained in Karol Wojtyła’s dramas. Our God’s Brother and In front of the Jeweller’s Shop, as well as various poetic works based on Wojtyła’s poetry, have permanently entered the repertoire of smaller theatre groups. Some of these, such as “Droga” from Poznań, “Teatr Karola” from Gliwice or “Hagiograf” from Cracow, subordinate their existence and actions to the goal of promoting the thoughts and works of the Polish Ppope. The variety of forms, from rhapsodic performances to musicals, means that the ideas that John Paul II left in his writings can still find new recipients today.