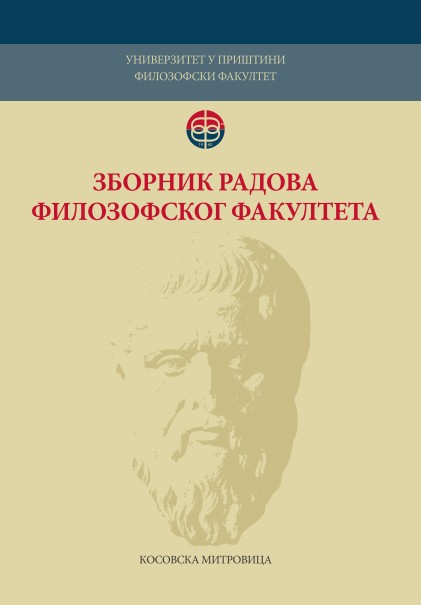 Summary/Abstract: Among the Serb people, Saint Sava was an educator, the teacher of everything in life. The authors believe that one can speak of the pedagogy of Saint Sava on the condition that the term of pedagogy is understood in its broader sense, rather than as a technical and modern term for a scientific discipline. However, any pedagogy, in its broader sense, relies on the understanding of the human essence, human life, world in which a human being lives. Saint Sava can then be justifiably viewed as a pedagogue in the sense of the contemporary rationalist educator. The primary and secondary sources of study explicitly show that Saint Sava was destined to take, through historical eras, upon himself the „deposits“ of ideas, thoughts, beliefs revealing underneath, irrespective of the influences, a genuine saint, the educator of his country and his people. Sava’s escape to the monastery meant his departure to the spiritual discipline, asceticism, solitary world from the realm of which comes light, brought about by laborious and strenuous exploits thanks to the Christ-like lifestyle. Terminologically, the word Christlikeness implies a human being as a genuine Christ-like being, Christlikeness of the soul, sanctity and inviolability of his personality that Saint Sava pursued. The pedagogy of Saint Sava has the characteristics of Christlikeness, which is reflected in the directly or indirectly formulated objective of the education of a human being—orthodox believer that possesses, and nurtures, Christ-like qualities. The paper includes the main characteristics of the Saint Sava's pedagogy that seeks its own essence in endlessly moving closer to sanctity through efforts, exploits, co-limitations, prayerful moods, and belief in eternal life, or, in a word, through the Christ-like lifestyle, and thereby also education of children, young, and adults in the spirit of deification and orthodox Saint-Sava-like enlightenment.From the futurological point of view, the goal of the Orthodox pedagogy for Saint Sava included an optimal implementation of implicit educational and functional tasks with the desire to nurture, through education, the traits such as philanthropy, sense of justice, truthfulness, patriotism, and the love of Christ that are almost disappearing in our era.