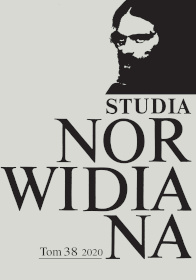 Summary/Abstract: The article focuses on Modlitwa, a small piece of prose written by Cyprian Norwid in his late literary output. Through the single phrase “impressed by the Viennese Theatre” we see (in an Islamic-Arabic costume) that the plot and other components of the piece draw on three tragic events, directly preceding its writing (in January of 1882): the Ringtheater fire on 8 December 1881 and two Warsaw disasters—the panic in the Holy Cross Church during the 25 December Christmas Mass, and the partially related three-day-long pogrom of the Jewish community on 25–27 December of that year. Uncovering these contexts, as suggested by Norwid, makes it possible to interpret Modlitwa as a parable which, by criticizing the secularization of today’s people, shows the way towards God and the fullness of prayer.