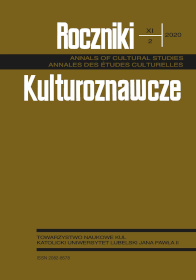 Summary/Abstract: Need to indent here, a rough analysis of the situation in the world is enough to realize the here and throughout modern Christianity, as well as the foundation on which today’s culture of the Western world is based. No wonder that many Christian intellectuals view it as multidimensional, highly complex, with sometimes bothersome and destructive symptoms. Undoubtedly, the Christian roots of cultural reality related primarily to Europe are correlated with the birth of the modern idea of scientific rationality, which brought humanity great opportunities, but also serious threats.Thanks to the idea of rationality, Europe has developed a culture that, especially now—in a way previously utterly unknown to humankind—is trying to exclude God from the sphere of public consciousness. Of course, the existence of God can be denied entirely or made it impossible to prove, assuming that—faith or nonbelief—it is a matter of purely subjective choice. Nevertheless, in both cases, in the opinion of many modern ideologies of (post-) modernity, God should not be of significant importance to the whole reality of public life.Thus, presenting the role of anti-Catholicism in the classical approach to (post-) modernity, as well as the tradition of Catholic anti-modernism, will allow for a more constructive display of the spirit of the conciliar aggiornamento, which is unfortunately related to the more general crisis of contemporary times of the 1970s and 1990s. It was during this period that one could notice both a retreat from “modernity” as a concept that “sensitizes” the paradigm of the cultural reality of that time, and “postmodern” religious revival understood as a challenge to articulate a living Christian tradition inscribed in the global complexity of the contemporary world. Contrary to the temptation to isolate oneself from external influences, and therefore the awakening cognitive dissonance, aspects of the current paradigm of (post-) modern reality may be essential and useful in shaping a constructive dialogue with the contemporary world, as well as in promoting Catholic culture that forms the identity of Christianity today. Therefore, the main aim of the above article is to display the fundamental issues concerning (post-) modernity and how they influence significant theological problems, especially in the context of the personalistic vision presented by Cardinal Stefan Wyszyński. It applies primarily to such vital matters as the problem of truth, hermeneutics, the specificity of a functional language, and their mutual correlation. In this sense, contemporary theological discourse can be significantly enriched by taking into account many aspects of contemporary postmodern theory, especially concerning culture. An essential condition for this, however, is to take into account the undoubted achievements of previous epochs. However, the fundamental task of Christians is to create the reality of authentically humanistic culture, capable of shaping the human person under his vocation. It is possible due to the sphere of personal and social values which, in forming man, condition the transformation of the entire cultural reality of the world from the perspective of “new heaven and a new earth” (cf. 2 Pt 3:13; Rev 21:1).