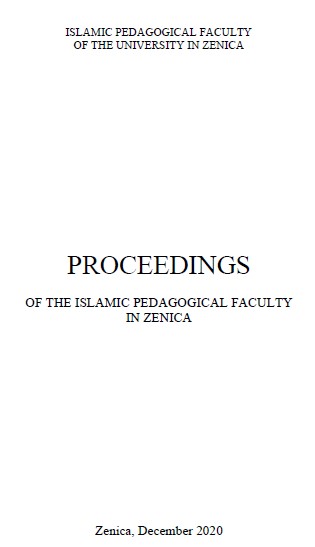 Summary/Abstract: Hasan Kafi Pruščak is one of the greatest scholars coming from Bosnia and Herzegovina. He was educated in Prusac, Sarajevo and Istanbul. He served in several places as a kadi and muderris. He participated in a few crusades and battles. He wrote 20 works among which the most famous, the most rewritten and the most commented is the work under the title Usul-ul-hikem fi Nizami Al-alem – Principles of Wisdom for the Order of the World. Although not being too extensive, the work has been assessed as very valuable – and for it the author received the award personally from the Sultan and the Court at that time. In this critically oriented work – which differentiates it from similar literature produced by Gazali and other earlier scholars, the author presents his observations through which he identifies the main problems of the society and the country at the time in the following forms: social injustice, incompetence of people in high places, non-existence of social and Islamic agreement and counseling, technical, technological and general backwardness of Muslims in comparison to their enemies (even at that time), corruption and nepotism, the downfall of personal and social morality standards… This work is important to us for several reasons. One of them is that this work can be considered and read in the contemporary context as an excellent social criticism and compared with the present since social deviations emphasized there (present at his time, i.e. 400 years ago!) are present nowadays among Muslims, in addition to other challenges and problems we face.