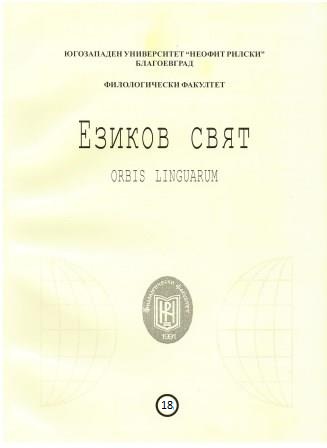 Summary/Abstract: It is well-known that voice as a grammatical abstraction is one of the oldest verb categories that can be found in languages around the globe. Even in Egyptian (from 3200 BC) and Akkadian (from 3000 BC) one can find grammatical expressions of this abstract notion which signifies its coming before the separation of tense from aspect. One could also observe a reflection of classical models over time on Russian and Bulgarian grammatical systems in the 19th century. Closely related to the category of voice in Russian and Bulgarian is the division of verbs into transitive and intransitive. The presented opposition is inherent to many language families but it can function and be expressed differently in various languages. In this study the opposition is not understood as a phenomenon of categorical nature – they are not categories but oppositions based on different signs or properties. Additionally, a mention is made of the opinion held by some linguists that the opposition transitivity ~ intransitivity is justified by certain lexico-semantic word-forming and grammatical peculiarities of verbs. Voice as a grammatical category in Russian, just like case, occupies an intermediate position between morphology and syntax which makes it necessary for a wider investigation.