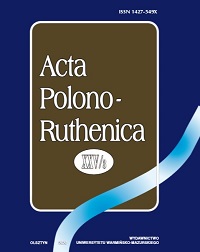 Summary/Abstract: The subject of this analysis is the image of a modern man, which is created by the discourse of glossy magazines. The conclusions were based on the theory of gender, according to which the communicative behaviour of men is characterized by a specific choice of lexicon units. Consequently, the article focuses on an analysis of lexical units and thematic groups of lexemes to determine which image of a modern man is represented by glossy magazines, because two variants of masculinity appear to have been added to the stereotypical male image: hegemonic and natural (a term introduced by S.A. Il’inyh) masculinity. To find out which of the options prevails, it was decided to analyse the mate-rial of the magazines “GQ” (“Gentlemen’s Quarterly”) and “Esquire”. These magazines are in the top five most popular monthly magazines for men. In this study, it was decided to apply the method of component and contextual analysis. As a result of the study, it was concluded that the image of a man, represented by the discourse of these glossy magazines, is rather stereotyped, but at the same time has distinctive features that reflect other ideas about modern masculinity. Thus, the image of a man is modified.