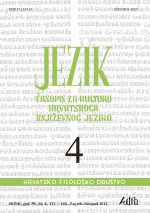 Summary/Abstract: This paper is devoted to the study of the sign systems of accents in Croatian. Until the mid-19th century most Croatian grammarians and lexicographers (Bartol Kašić and others) used three signs, taken over from Ancient Greek: the acute accent (´), the grave accent (`) and the circumflex ( ̑ ). From the mid 19th century onwards a four-sign (or five-sign) system was established by Vuk Stefanović Karadžić and Đuro Daničić ( ̏, ̑, ´, `, ̄ ); this system has been used in Croatian accentology until today. However, there is also a two-sign notational system ( ', ̄ ) developed and used by Bulcsú László.