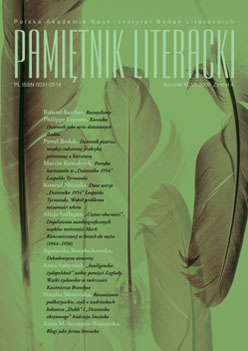 Summary/Abstract: The present text is an attempt at a comparative analysis of the two existing versions of Leopold Tyrmand’s "Diary 1954": the original 1954 version, and the revised by the author issued in 1980; it also questions the identity of those texts. The first part of the paper is a summary comparison of the two aforementioned versions, mainly as far as formal changes and additions of fragments absent from the first version are concerned. In the second part of the paper the author tries to establish the identity of the text as confronted with the form of an intimate diary, being – roughly speaking – the first version. The main concern here is the problem to which extent the 1980 version is a diary and to which a novel in the form of a diary, and if there is only one text in two versions or two separate texts using the same plot. The author of the paper also endeavors to reconstruct the writer’s strategies that lead to transformations of the text’s substance aiming at creating Tyrmand’s self, increasing the communicativeness of the text, making an evidence of his presence in time, and turning the diary into a type of autobiographical synthesis. As far as the identity of the text is concerned, the author of the text claims the 1980 version to have a hybrid form and puts forward two terms to define it: ‘ironical poem’ and ‘diary as encapsulated autobiography.’