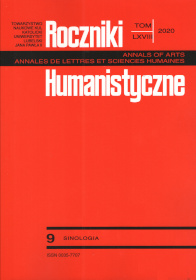 Summary/Abstract: In early Chinese philosophy, the concept of a unique individual separated from the outside world has no ontological basis. Every person is an open, interdependent construction, whose uniqueness can only be achieved and cannot be given. A person is an undetermined range and locus of experiences expressed through specific roles and relationships. In this article, the Author analyses such an understanding of the person in Confucian and Mencian thought. In Confucius’ philosophy, the junzi 君子 lives up to his status as long as he maintains ren 仁 relationships and displays proper emotions connected to ren. The author argues that, in the Analects, ren is a concept connected to the terms shu 恕, zhong 忠, yi 義 and li 禮. Ren may be interpreted as an ideal interaction that starts with an emphatic reaction towards another human being. Emphatic reactions, along with zhong—a sense of duty— is the basis for applying the situational moral norm yi and carrying it out according to li—the social norm. Ren behaviour is different for every person in every situation. It has to be learned and practised during the process of self-cultivation, xiushen 修身.Mencius’ moral theory is more complex, and concentrates on human nature and its features. According to this, human nature is shan 善, commonly translated as ‘good,’ because every person has four dispositions—emotions for developing ren, yi, li and zhi 智. Ren may be considered a virtue—it is not inborn, but has to be achieved and learned. Another skill required to be a sage was the understanding that every situation is unique, and that there is a right time to apply different norms—shizhong 詩中. Mencius’ thought is not simply an ethics of virtue, but it is also influenced by situational factors. Mencian moral behaviour is complex; not only does it require a deep understanding of oneself and the other, but also the use of all senses, sensitivity and creativity to deal with every situation in a different way. A sage, or a person who wants to become one, has to watch, listen, feel and understand every person and every situation. Moral cultivation in Mengzi’s thought is also a cultivation of the body’s qi 氣 (vigour or energy). Properly cultivated qi becomes haoran zhi qi 浩然之氣 (overflowing qi) and enables one’s body to have the zhi 志 (will) to follow its ren (heart/mind).