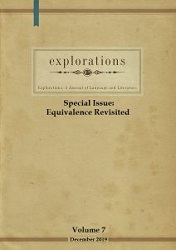 Summary/Abstract: The Hebrew Bible reached Europe for the first time in a Greek translation known as the Septuagint. Before Jerome prepared the translation of the Hebrew text – the Vulgate, fragmentary translations to Latin used as their source text the Septuagint, which influenced the Jerome’s work as well. The focus of this work is the lexeme hesed, semantic field of which refers to covenant and encompasses elements as action for the benefit of the counterpart, as well as help, rescue and mercy. The main semantic element of the discussed lexeme is two-directional relationship and reciprocity. As a result of combination of linguistic, social and cultural factors, the translators of the Septuagint chose the lexeme eleos (mercy) as an equivalent for the Hebrew hesed. In Vulgate, hesed is rendered as eleos also in the places where Septuagint favors different equivalents. In this article I will try to argue that through the Vulgate, Septuagint exercised an indirect influence on rendering of the Hebrew lexeme hesed in Polish translations of the Hebrew Bible. As a result, the original semantic field has been modified, and in particular, the semantic elements relating it to covenant and reciprocity have been lost in translation.