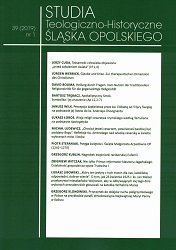 „Chociaż jesteś cesarzem, powinieneś bardziej być poddany Bogu”. Refleksje św. Ambrożego nad władzą cesarską w świetle wybranych mów i listów
“Even if you are emperor, that is all the more reason for being obedient to God” (Ep 10*, 8). St. Ambrose`s reflections about imperial power as reflected in his selected letters and speeches

Summary/Abstract: The aim of this paper is to present St. Ambrose`s reflections upon imperial power. The bishop of Milan did not write any systematic work on that topic. Actually it is possible to discover his opinion on this question, since there is much concern about it in his letters and speeches. For Ambrose imperial power was the basis of social order. The source of the emperors special position in the society derives from God’s will. Piety, fidelity, care for the church and welfare of his subjects were the main features of a good ruler, who should be encouraged in his duty by prayers and the obedience of his subjects.