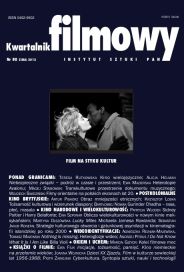 Summary/Abstract: According to the author films based on Choderlos de Lacos’ novel are different from the book, and very different from one another, apart of course from the superficial similarities in the storyline. This is so, not only due to creative treason, but also because cinema placed this novel in the context of very different cultures, with the action taking place in very different places and historical periods, other than those appearing in the original. Finally there is the question of adapting the novel to the needs of a different medium. Apart from changes that were intentional on the part of the artists, there are also changes that they were forced to introduce, the effect of which was an intricate interweaving of cultures. The author focuses mainly on the modernized film versions of the novel such as those directed by Roger Vadim, Josée Dayan and Roger Kumble, but also the Korean transcription ("Untold Scandal", dir. E J-yong /2003/) and Miloš Forman’s "Valmont", within which she sees a Czech gaze. According to Helman modernizing de Laclos’ novel is the result of a conviction that love games that contemporary people play are not less sophisticated and perfidious than those of the characters of the novel. The changes necessitated by the realities of today are obviously less interesting than those caused by psychological and cultural differences. Helman concludes that what the filmmakers particularly explore is the exegesis of evil carried out by the author, and his analysis of the reasons for people finding pleasure in it. The evil we are dealing with here, is however of a special kind – namely sexual evil.