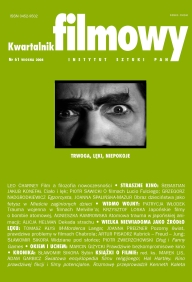 Dekada strachu
The Decade of Fear

Summary/Abstract: The Cultural Revolution (1966-1976) – one of the greatest tragedies experienced by the Chinese people, caused great losses and permanent changes in the political, social, cultural and the moral sphere of life. It devastated the great material and spiritual legacy of the traditional Chinese culture. The author of the article presents the echoes of this period in the films of the most important representatives of the fifth generation: Chen Kaige (“Farewell my Concubine”, 1993), Tian Zhuangzhuang (“The Blue Kite”, 1993) and Zhang Yimou (“To live”, 1994). Through the analysis of particular scenes, Helman points to the fact that these films do not speak directly about what happened during the Cultural Revolution, as of course this topic was strongly disapproved of by the Chinese state. That is why Cultural Revolution is barely a backdrop for the lives of the main characters of the films. According to Helman, the strength of these films lies in their many verbal allusions, subtexts, and a complex network of icons and meanings, that are also readable for the Western viewer, who is neither Chinese nor aware of the history of the Chinese nation.