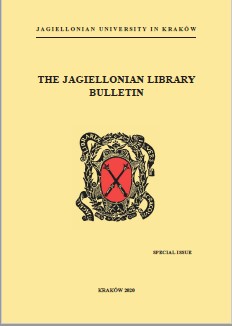 Summary/Abstract: The book collection of the House of Sanguszko – which is one of the most famous Polish noble families, having a distinguished record of service to the Polish State – is one of Poland’s national cultural treasures. Their private library and archive have had a very turbulent history. After World War II the collection was dispersed and some of it found its way to the Jagiellonian Library. It was not until 2002, however, that part of the collection (including manuscripts, incunabula and other old prints) formally became the property of the Library following the signing of an agreement between the Library and the Sanguszko family. The Jagiellonian Library has accepted the donation of nineteen inventory units of manuscripts, whose state of preservation has been analysed using the descriptive method. This article presents bibliographical information concerning each of these manuscripts, i.e. the kind of binding (if any) and paper, the kind and degree of damage to the binding, paper and the body of the manuscript, as well as the characteristics of the ink. All the manuscripts have been divided into five categories, according to their state of preservation. A general evaluation of their condition has shown that seven of the manuscripts can be made available to readers, while four require restoration and conservation.