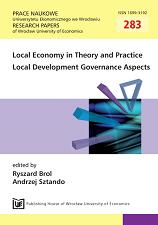 Summary/Abstract: The purpose of the article was to investigate the impact of the three fundamental statutory categories of budget revenue, i.e. own revenue, general subsidies and specific grants on the size of investment made by local government units in Poland. The subject scope included the local government subsector in its entirety, as well as divided into four groups: communes (gmina), cities with powiat rights, districts (powiat) and voivodeships (województwo). The time period was 1999–2011; the spatial scope covered the territory of the whole country. The research proved that, with one exception, there was a relationship between the increase in specific grants and capital expenditure and between the increase of own revenue and capital expenditure.