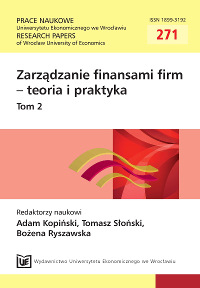 Summary/Abstract: PRs are a new category of local government revenues, which was introduced by changing the law on public finances at the end of 2006 and which took effect in 2007. By principle, these revenues should be converted into property expenditures. Their formalisation did not only allow assessing their absolute size but also a comparison with the longer existing property expenditures. Both categories were the subject of analysis in this article. The theoretical part analysed the PRs in terms of their ownership and location in the structure of total revenues; compared them with other property related incomes; as well as characterised revenue expenditures. The empirical part examined the absolute size of both categories, their relationship to various elements of LGUs, as well as the share of property related revenues and expenditures in relation to total income and expenditures.