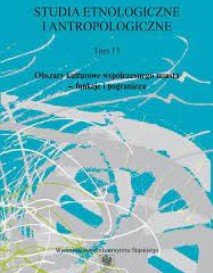 Summary/Abstract: The issues touched upon in the article concern the impact of the “supernatural” element in re-defining the Ukrainians’ identity during and after the Revolution of Dignity, including the merger of the events’ casualties with the image of an angel hero fighting under the leadership of Archangel Michael against the Yanukovych regime. It instigated the process of the mythologizing victims, whose souls – according to collective imagination – composed the Nebesna Sotnya waging war against evil from the heavens above, while at the same time protecting the living. The community commenced the said re-definition of identity, among others, by referring the initiation hero’s journey, who first fought at Maidan, then proceeded to the battlefield of war, while still remaining under the “supernatural” protection. Moreover, mystical signs only reinforced the rightfulness of taking up the challenge and the righteousness of the very idea.