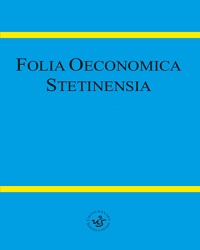 Summary/Abstract: In the article, an attempt was made to compile a dataset which was devoid of outliers, on the example of Cracovian apartment market. Robust estimation was the tool which was used, but only its two methods were considered: Baarda’s and Huber’s. Huber’s method belongs to the so-called active methods which means that it allows to eliminate gross errors during the estimation of the parameters of multiple linear regression where a unit price is called a dependent variable or forecasted one. Baarda’s method is a passive method which is based on statistical tests and allows, after determining the parameters of a multiple linear regression model, to indicate the observations which may be burdened with gross errors. Thus both mentioned algorithms differ from each other substantially. In this publication, Baarda’s and Huber’s methods were compared in the context of their effectiveness for the analyzed dataset, and as tools of preparing the data for further analysis. The results showed that Baarda’s method is more appropriate for the analyzed dataset than Huber’s algorithm, but it does not mean that the active method is worse.