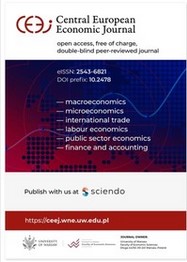 Summary/Abstract: Municipalities in Poland are important makers of local cultural life. Municipalities organise and fund public cultural entities: libraries, houses of culture and so on. They decide on 70% of public spending on culture. The local spending on culture was grown in the past years. But the level of this spending varies between municipalities. The aim of this study is to find determinants of these differences. Public spending on culture is important in less-developed or peripheral regions where citizens do not have access to private cultural institutions. That is why this study focuses on rural municipalities. In econometric panel model, 1,565 units and their operational spending on culture in the years 2002–2014 is analysed. Four groups of potential determinants of spending are analysed: characteristics of local society, the financial condition of local government, characteristics of local politicians and the factors that influence the costs of cultural services. Such an approach has roots in the median voter model and is widely used in the analysis of decentralised spending, but the studies related to cultural spending are rare. To my knowledge, there is no such analysis for Poland or other East European countries. This study proved that an expenditure demand model is good for the analysis of local spending. This kind of analysis can help to understand local spending’s variation. It also helps to design the proper revenues equalisation system.