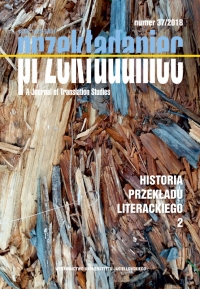 Summary/Abstract: Polish fans of science fiction, fantasy and horror (here referred to jointly as speculative fiction) emerged as a notable target audience for translations in the 1980s. Widely available translations from English in these genres started to appear in the 1990s, and were instrumental in establishing their popularity in Poland. At that formative stage, the renderings available assumed what polysystems theory would call a primary or central position. After the genre-forming period, however, translations have become subject to a number of new pressures: the expectations of a fan audience with an increasing competence in English; the growing accessibility of English-language originals; and the accumulating body of previous translations, including audiovisual and digital texts in major series and franchises. Due to these factors, translations of speculative fiction have been undergoing a demotion from their genre-making role, assuming the default, secondary or peripheral role in the polysystem. Since this role is played in a polysystem they once helped shape, the conservatism of peripheral translations involves their compliance with previous translation standards and canonized renderings, and is reinforced by the influence of digital media, which typically offer vulnerable translations (i.e. translations easily compared to or present alongside original versions). This goes hand in hand with the emergence of speculative fiction as a shared idiom of popular culture, with its interest in lucrative media franchises and shared universes. As written texts and their translations now constitute a less prominent section of the spectrum of speculative fiction available to fans, ties to other texts, notably digital and audiovisual ones, may be prioritized over other qualities of translation. The evolution of translations is accompanied by that of the genres’ readership: as an audience, Polish fans of speculative fiction in the 21st century seem to be characterized by their interest primarily in the world depicted by the authors and its consistency.