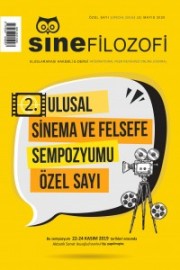 Summary/Abstract: The changing / transforming society in today's complex and speed world creates traumatic effects on family members. Traumatic past has an impact that imposes on both personal and social memory. In this sense, narration as a way of reckoning with the traumatic past and its kind, cinema, functions as a memory space and a means of memory. Turkey's host family in particular suffered structural transformation, taking its share of social change and this is reflected in cinema. In our country, where the family is seen as a sacred structure, the reasons leading to the shaking of the institution were generally searched abroad until 2000 in Turkish cinema. After 2000, the factors that caused the family institution to be shaken begin to be searched in the family. After 2000 the cinema represents the core of Turkey's traumatic past in the family is seen as continuing, albeit in different ways. In the study, the journey to the family's traumatic memory is discussed through the films of Pandora's Box (2008), one of the founding directors of the new Turkish cinema, which is addressing the same issues, and Tolga Karaçelik's Butterfly (2018), a second generation director. In this sense, the films were analyzed and compared with each other under the themes of family, memory and travel with descriptive analysis method. As a result of the analysis, common intersection points of these themes in terms of content were captured in many ways, and it was also seen that the personal memories of the directors were reflected in their films. Although the narrative structures differ due to the differences in the styles of the directors, it can be determined that cinema is used effectively in the reckoning of today's people with the traumatic past. In both films, it is possible to talk about the family members' reckoning with each other, the journeys they have begun to continue, and the past they have touched, even if the desired past is not reached.