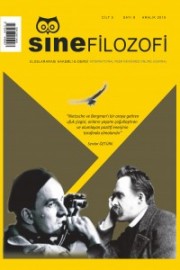 Summary/Abstract: In this study, the use of cartoons for propaganda purposes by the three big Axis Powers (Germany, Italy and Japan) in World War II was tried to be revealed.For this purpose, in the study ,1940 German made Der Störenfried, 1941 Italian made Il Dottor Churkill (Doctor Churkill) and 1943 Japan made cartoons Momotarō no Umiwashi (Momotaro’s Sea Eagles) were analyzed using the semiotics analysis method in qualitative research methods. Cartoons in the study were analyzed within the framework of the semiotics concept Swiss Language Scientist Ferdinand de Saussure. In the light of the findings, it was seen that the Allied States were presented as enemies trying to invade the world in the propaganda films made by the Axis Powers and in this way, the public opinion was tried to build hate speech against the Axis Powers. On the other hand, it was revealed in the cartoons that the Axis Powers started a great struggle for peace of the world against the Allied Powers which tried to occupy the world. Thus, it was concluded that the Axis Powers tried to legitimize the war through cartoons and tried to find public support against the Allied Powers.