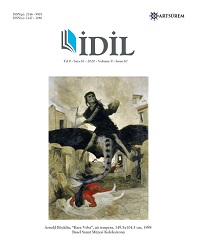 Summary/Abstract: People have tried different methods in their efforts to communicate since their existence. The concept of visuality has an important place in these methods in today's world. The visuality extending to the cave walls of primitive people, including everything that can be seen, is a world of images that are effective in conveying thoughts, where expectations and dreams are together. With the proliferation of mass media since the beginning of the twentieth century, it has become a large part of our lives. Images are detached from time, representing past and present, perceived through senses, playing an important role in conveying a message by being designed in mind; are the parts that are at the basis of visual, perceptual and linguistic processes. Designing is also reviving and thinking of anything in the mind. The sense of creation of the mind activates the imagination by establishing the relations between the necessary images. In creative thinking that stimulates the imagination, it is reproduced using the information available. The ability to create the new that occurs as a result of the use of images stems from the trends that people have had since birth. This ability starts with seeing. Seeing has a privileged place among other senses. In the research; topics such as visual, visual thinking, what and how perceived objects are perceived are combined with related concepts and interpreted by doing a literature review.