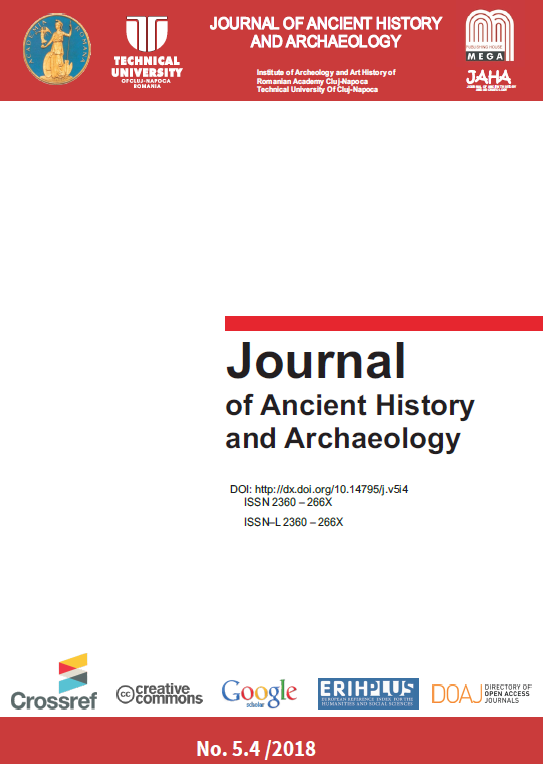 Summary/Abstract: We examine herein the golden plaque identified in the looted Sarmatian grave identified at Dunaharaszti. On its surface are rendered three wolves (?) running left and a tamga, all in relief. The tamga is in the shape of two adjoining volutes. The loops are waving inward on the first, and outward on the second. The symbol is believed similar to that ascribed to king Farzoios for whom Olbia struck golden coin grosso modo by the end of AD the 50’ies – end of the 70’ies. Tamga symbols of king Farzoios are mainly known from coins and are in the shape of two half-circles set by the extremities and joined by a vertical line.Upon the examination of the symbol on the plaque from Dunaharaszti it was noted that parallels mentioned for it differ much, while its’ ascribing to king Farzoios farfetched. The author agrees that tamgas with certain deviations from those on the coins for Farzoios had belonged to other individuals, likely, from amongst the group led by this king or from within a group of Sarmatians under the control of the kingdom of Farzoios.The author mentions for the tamga on this plaque a few analogies identical or similar from the north-Pontic area, arguing that some are specific to the region on the right bank of the Dniper. In terms of dating, it is noted they are specific mainly to the period comprised between mid 1st century AD and mid 2nd century AD. It is further mentioned that in the north-Pontic area tamgas with parts similar with that from Dunaharaszti are numerous (in particular, the volutes with loops waving inwards), yet, these are not parallels with the tamga discussed here, according to the author.Last but not least it was noted that the tamga on the plaque at Dunaharaszti is practically the single authentic symbol on a valuable object from the Sarmatian Iazyges environment of the Great Hungarian Plain. Another observation is related to the fact that the tamgas in the Sarmatian Iazyges environment of the Great Hungarian Plain come from a series of finds that span over a period of ca. three centuries, while their number is insignificant. The small number of the tamgas in the Sarmatian Iazyges environment confirms they were used by a restricted number of Sarmatian tribes, the Iazyges from the Great Hungarian Plain not included. This further underlines also that tamgas in the Germanic environment were not adopted from the Iazyges, but reached the Germanic peoples upon contacts and military conflicts with the Sarmatian world from the north-west Pontic area.The plaque at Dunaharaszti dates most likely to the second half of the 1st century AD and reached the Great Hungarian Plain sometime towards the end of the 1st century AD (AD 80’ies) when very likely another Sarmatian migration occurred in the area. The tamga on the plaque evidences, according to the author, the presence in this area of the elites and is evidence, given the approximate period of Farzoios’s rule, that not those Sarmatians in the first wave carried the plaque to the Great Hungarian Plain. This confirms, together with other finds, that the Sarmatians entered this area in a few waves over the second half of the 1st century AD, possibly even by its end. Also, it is concluded that part of those migrating to the area were connected or even formed part for a short while from the Sarmatian group led by Farzoios and Inismeos.Lastly, it is not excluded that the plaque from Dunaharaszti indicates, beside a series of artefacts and elements from several archaeological finds, the presence within the wave of Sarmatians that entered the Great Hungarian Plain of individuals from the elites of the Sarmatians (Alani/Aorsi) who settled the north-west Pontic area starting with mid 1st century AD. This is possible, according to the author, should one keep in mind also that such elite might have been involved in the Iayzgian aristocracy from the north-west Pontic area. Regardless the facts, it is very likely that its representatives played an important role within this wave.