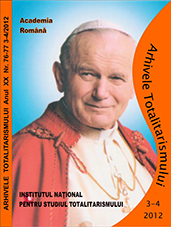 Summary/Abstract: The article tackles Dorin Tudoran’s dissent in the first part of the 1980’s. A poet and publicist, Tudoran joined in the 1970’s the group of the Romanian writers criticizing, within the guild, the cultural policies of the communist regime. Soon after, in the beginning of the 1980’s, Tudoran took a step further and engaged into dissent. His essay Frost or fear ?on the condition of Romanian intellectual under communist, that reached the West in 1984, remains his most important contribution to the Romanian dissent thinking. Using unedited and edited documents from the archive of the former Securitate and the archive of Radio Free Europe, as well as memoirs and interviews books, this article aims to analyze Tudoran’s road to dissent and its concrete manifestations, such as the drafting of documents or taking public stands. Also, the article discusses the methods used and the measures taken by the former secret police – the Securitate – to put an end to Tudoran’s dissent.