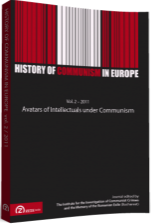 Summary/Abstract: This study discusses the case of mathematician and futurologist Mihai Botez, one of the most important Romanian dissident thinkers in the 1980s. Using unedited documents from personal archives, documents from the archives of the former Securitate, Radio Free Europe, as well as oral history sources, this study emphasizes how Mihai Botez’s dissidence emerged, the main directions of his dissident project, similarities in terms of ideas with other dissidents in Eastern Europe/Soviet Union, the relevance of his dissent in relation to Communist power and Romanian society. The study consists of two parts, each divided in several sub-themes. The first part of this study deals with investigating the intellectual roots of Botez’s dissident thinking, discussing also the influence that his professional education had on the rise of his political consciousness. It also discusses the main directions of Mihai Botez’s dissidence: the conceptualization of solitary dissidence as a first step towards individualizing a group of independent critical intellectuals, dissident strategies, and expected results. The second part deals with Mihai Botez’s works and research aimed at developing the cybernetics of Communist regimes. His dissident project aimed at bringing to light the parallel society that existed but which kept silent, encouraging diversity of views and creating pressure from society, one capable of influencing government strategies.