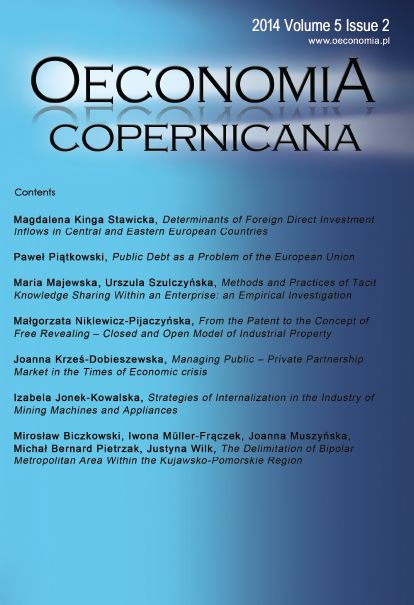 Summary/Abstract: The objective of the article was to re-define the bipolar metropolitan area within the area of the Kujawsko-Pomorskie region (NUTS 2). Concentration of metropolitan features, as well as socio-economic situations of its communes (NUTS 5) in 2011, and also the dynamics of communes’ development in the period 2009-2011 were considered in the procedure of delimitation. Bydgoszcz and Toruń, as the economically strongest cities in the region, were established as the dual core of the bipolar metropolitan area. It was assumed that the determined metropolitan area would cover the best developed and the fastest developing communes which met the following criteria of a metropolitan area: neighbourhood, continuity, compactness, maximum distance and population. The development levels of the communes were determined with the use of syn-thetic measure. Its values were calculated considering the economic (e.g. the amount of income) and also social (e.g. unemployment) aspects of regional devel-opment, as well as features typical of metropolitan areas, such as: well-developed sectors of R&D, knowledge-based economy and serving superior services. In the research, linear arrangement methods classifying as taxonomic tools of multivari-ate data analysis was applied. The metropolitan area resulting from the research (BipOM) slightly differs from the Bydgoszcz-Toruń Metropolitan Area (B-TOM) which was formally ap-pointed in 2005 and composed all of the communes located within the area of the Bydgoski and Toruński districts (NUTS 4). Chełmża and Koronowo, as the less developed communes of the districts, were excluded from the new metropolitan area, while the communes of Ciechocinek, Nakło and Unisław, belonging to the neighbouring districts of the region, were included in the BipOM due to their significant level of regional development and its dynamics. Furthermore the Inowrocław district (bordered on the BipOM) was identified as the prospective candidate for the BipOM, due to the fact that its communes demonstrate a high potential for regional development.