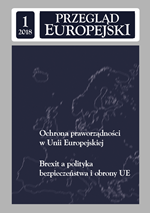 Summary/Abstract: This article deals with the analysis of migrant crisis in the years 2015–2016 and its impact on the relationsbetween Macedonia and the EU member states. In 2015 Macedonia, which has an official EU candidatestatus, was in the centre of the migrant crisis. It was one of the countries on the Balkan migrant route.Migrants entered Macedonia mainly from Greece. Macedonia was receiving contradictory statements fromEU countries concerning the issue of dealing with the migration crisis. The aim of this article is to presentthe complex situation of this country as a multi-ethnic with a large Muslim minority and its politics inthe context of disputes with EU concerning solving of the migration crisis. To accomplish the goal, theanalysis of election campaigns and content analysis of media which were done during the study visit willbe presented. Main research problem concerns the influence of Macedonia’s policy and actions taken asa response to migrant crisis on the direction of the bilateral relations between Macedonia and EU countries.