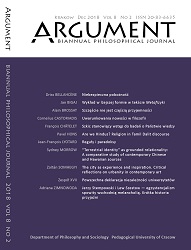 Summary/Abstract: Based primarily on original sources in Tamil as well as interviews, the article seeks to portray the attitude of Tamil Dalit intellectuals and political leaders towards the question of religion. It seeks to discover the role of religion in their discourse and how they utilise religious matters to mobilise their fellow caste members. It maps their efforts to distance themselves from Hinduism and to propagate the particularity of Dalit deities and Dalit religion as a part of their newly constructed identity. Their opinions on the possibility of conversion are also briefly noted. These attitudes are examined from the viewpoint of the differing emancipation strategies of the three major Tamil Dalit castes. The Paraiyar as well as the Arunthaiyar leaders try to reject the Hindu identity, though the common folk consider themselves to be Hindus. The Devendrars on the contrary associate themselves with the Hindu gods and Hindu temples, they claim direct connection with some of them. Even they, however, tend to emphasise particularity of their deities as a part of their identity building.