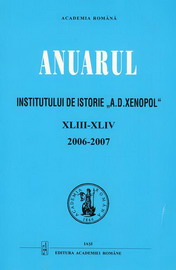 Summary/Abstract: The high esteem shown by the Orthodox princes to the fragments of the Wood of the Holy Cross can be explained by their status of imitators of both Christ and the Emperor. This also caused the competition for carrying out a kind of protectorate over the monasteries from the Holy Mountain of Athos, in connection with the inheritance of the Byzantine imperial idea. This was the way adopted also by the Romanian princes, already during the 15th century. Prince Alexandru Lăpuşneanu had donated to the monastery of Dochiaru a fragment of the Holy Wood, which was later bound in silver by Ralu, Prince Alexandru Ipsilanti’s daughter, in 1779. The biggest and most venerated fragment of the Holy Wood is being preserved at the monastery of Xeropothamos (on the Holy Mountain of Athos). The paper follows the repeated pilgrimages of this relic in the Romanian Principalities, during 1757-59, 1785, 1797 and 1824, as well as the emotional impact which it produced within the Romanian society. A copy of this relic, considered for a long time authentic, is part of the treasure of the monastery Putna, the burial place of Stephen the Great. The fragments of the Holy Wood were, for a long period, gifts destined to the crowned ones only. During the vassalage to the Polish kings, the Moldavian princes, starting with Peter I (1387), would kiss such a relic – the Jagellonian double cross, gesture carried out at the end of the homage ritual displayed in front the suzerain. This relic had been given to the Jagellonian kings by the Byzantine Emperor in 1386 (or 1420, according to others). Vasile Lupu, the one who, once he became a prince, took the forename of Vasile (Basilevs meaning emperor), also received a gift from the Patriarch of Jerusalem (1653). In his turn, Prince Constantin Şerban, during his peregrination after he was dethroned, would carry with him a fragment of the Holy Wood, which he donated in 1681, to the Church of Sy. Onufrie in Sawrow (Novy Sobor, in Galicia). In the end, the paper refers to the pilgrimage to Jerusalem, of 1682-1684, by Helen, Prince Şerban Cantacuzino’s mother. This was probably possible thanks to the Russian-Ottoman peace of 1681, in Radzin, which allowed Christians the freedom to visit the Holy Places in the Middle East. Helen’s gesture can be seen as homage to her homonym patron, St. Empress Helen, the one who is traditionally supposed to have discovered the Wood of the Holy Cross.