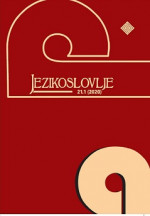 Summary/Abstract: One of the unstable spots of the Croatian orthoepic norm is the accentual system and the pronunciation of post-accentual lengths. Recent research on Croatian speech indicates that long and short post-accentual syllables in Croatian urban dialects are mostly not distinguished, and even in the dialects with the Neoštokavian four-accent system the long postaccentual syllables are being reduced (Pletikos Olof 2013). This phenomenon is frequently attributed to the markedness and the low level of prestige of post-accentual lengths among speakers of Croatian (Škarić & Lazić 2002). Because the standard norm should determine the stylistically neutral and the unmarked, linguists quietly accept the lapse from the regulations in this segment. In the light of studying Croatian urban dialects, this paper aims to describe the realizations of post-accentual lengths in the speech of Osijek, particularly in genitive and instrumental cases of e-declension nouns, in some suffixes, and in the present tense and definite adjective forms. The results are compared with the lengths produced by a model speaker of Standard Croatian when she is intentionally producing and not producing the length. The lengths in her speech are taken as a reference point for the categories of long and short. Previous research has shown that in Osijek, whose speech belongs to the Neoštokavian four-accent system, the lengths not immediately following rising accents most commonly disappear, and the lengths following rising accents weaken (but they do not disappear), especially those following the long-rising accent (Benić 2007). Still, a systematic description of post-accentual lengths for the mentioned word categories does not exist. This research is based on the speech analysis of people from Osijek who read sentences saturated with words with lengths. The results have shown that there is a tendency to reduce post-accentual lengths in certain forms, but the phenomenon is rather rare after rising accents.