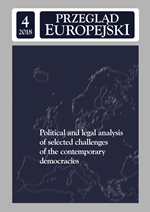 Summary/Abstract: Ever since the end of the wars of the nineties, as well as the declaration of independence of Kosovo, Serbiahas fallen of the radar, both within the international political community, as well as within the academia.Yet, in the meantime, the societal and political situation within the country has changed drastically, withthe former warmonger of the nineties, Aleksandar Vučić, having taken hold of seemingly unlimited power.Serbia has, during his reign, become entrenched in corruption, the multitude of affairs being producedon a regular level serving as proof. Drawing on existing theories of political corruption, we shall tackleSerbia’s political corruption via the examination of the most prominent affairs, coming to the conclusionthat Alatas’ designation of “tidal corruption” fits contemporary Serbia best, as well as classifying mostprominent instances of corruption.