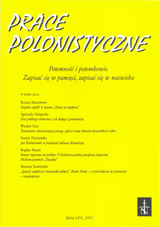 Summary/Abstract: The article is devoted to Memoirs written from 1880 to 1883 by Bogusława Mankowska, General Dabrowski’s daughter. The attention is focused on three major issues presented in the text of the memoirs. Firstly, it shows how the reconstructed image of the past by Mankowska depends on the social influences, especially the cult of her father and the legions, which was supported by her mother and family education. It determines the basic trends of Memoirs, that is the apotheosis of the old patriotic patterns. Secondly, the article explains that the admiration for the male patriots, which is often expressed in her work, in fact, reveals dissatisfaction in the woman with passivity imposed upon her. Because woman in the nineteenth century could not take active struggle for the freedom of the country, they were looking for alternative forms of activity. Writing memoirs is Mankowska’s they way of fight, and she calls herself a veteran. She is fascinated by the life of a soldier. Finally, the article shows that the desire to fight reflects the real nature and disposition of the author. Her emotionality and spontaneity impact strongly on the style and language of the memoirs. Just the poetics of Memoirs can be regarded as the most interesting aspect of this text.