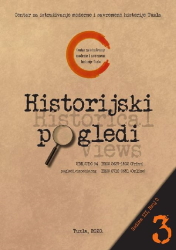 Summary/Abstract: The dramatic currents of the history of the 19th and 20th centuries in the Balkans cannot be seen in a more comprehensive way, separate from the wider European / world context, geopolitical order, influence and consequences of the interesting logics of superpowers, models of de-Ottomanization and Balkanization. At the end of the 19th and the beginning of the 20th century, the Ottoman Empire was in a difficult position, pressured by numerous internal problems, exposed to external political pressures, conditions and wars. Crises and Ottoman military defeats in the Balkan Wars (1912-1913) and the "Great War" (1914-1918), along with the processes of de-Ottomanization and fragmentation of the territories in which they lived and the growth of divisions, disrupted the self-confidence of Muslims. Expulsions and mass exoduses of entire populations, especially Muslims, culminated in the Balkan wars. Bosniaks, as well as Muslims in the rest of "Ottoman Europe", found themselves in the ranks of several armies in the "Great War". Many Muslims from the Balkans, who arrived in the vast territory of the Empire in earlier times as refugees, also fought in the units of the Ottoman army. In that war it was defeated. On its remnants, a new state of Turkey (1923) was created after the Greco-Ottoman war (1919-1922).