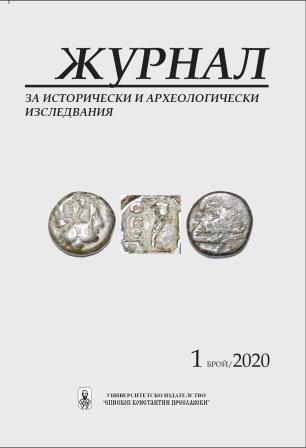 Summary/Abstract: The aim of the article is to present a fragment of roman phalera, found during archaeological excavations on „Shishmanovo kale“ –late roman fortress build on hill close to modern city of Samokov. The fortress is erected in 4th c. AD., but some small finds from it, could suggest roman military presence here at least one century earlier, in the end of 2nd –3th c. AD.During archaeological excavations in 2008, has been discovered a fragment of small round plate made of bronze. From the one side it has apartly preserved mythological image with curl hair, the opposite side is leftrough. On its periphery is formed narrow frame and one fastening holedrilled in it after the casting.The fragment is part of roman military decoration – phalera. Such objects are well known from numerous gravestones of roman soldiers, depicted with different number of phalerae (most often nine) on its chests. On front sides of phalerae often has a image of Medusa, Jupiter-Ammon or other mithological character.Unfortunately less than 1/3 of the samokov phalera is preserved,which makes difficult the identification of the image.If we compares it with other specimens, including by gravestones, we may notice some similarities with most popular and frequent image on phaleras – Medusa.The possibility for Medusa image on the Samokov phalera is real, but this is not the only option because of the small preserved part of it, and we mustn't reject other options like Apollo or Sol for example.The style of image is close to this on some gravestones with phalerae from the western part of Empire, or bronze applications from Thrace dated in the first half of 2nd c. AD.Similar date – 2nd c. AD. we assume and for our phalera too.