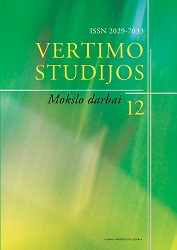 Summary/Abstract: This paper explores the variation between non-past (present and future) synthetic and periphrastic passive verb forms in the Gothic Gospels in an effort to evaluate the possibility that the availability of functionally identical forms of the passive was exploited by the translators of the Gothic Bible as a way of manipulating the stylistic composition of the Gothic text. Based on the evidence of the Gothic translation of the Gospels, although the Gothic synthetic passive constructions do mostly occur in stylistically special environments, the existence of other clearly verifiable competing motivations makes the stylistic motivations difficult to verify. It is concluded that the distribution of forms is largely determined by factors such as literalism as the main translation technique as well as contrasts between the synthetic and periphrastic ‘be’ passives in terms of the actionality of the former and stativity of the latter.