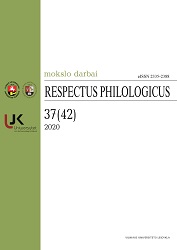 Summary/Abstract: One of the most popular themes in Latvian literature which has regularly arisen at different stages of its development since the 19th century is the idea of returning to the roots, the depiction of a mythological world scene when people lived according to the rhythms of nature, in full harmony with themselves and the world. Ancient times are depicted as a time when Latvians felt free living at their farms and followed the rules of the mythical time. This peculiar feature which we analyse on the basis of literary works, describes vividly the nation’s collective consciousness, desires, and needs. The need for emphasizing the idealised ancient times in the nation’s consciousness is related to the most significant transitional stages in the development of the country, which are characterised by the increased attention to the issues of national identity. During difficult stages in history, nostalgia is a security mechanism which looks for stability in the past which we do not have in the present. The aim of the paper is to see how the nostalgic reflection on the idealized ancient times in the Latvian literature is related to the pivotal stages in the country’s history when special attention was paid to the national awareness and identity issues.